Stritzky's brewery is mentioned in all catalogues and directories of the second half of the XIX century as a powerful component of industrial Riga.

In 1854, manufacturer Shults has opened brewery on Nikolaev street 75/77 (nowadays A.Briana) which in 1868 bought the Baltic-German trader and businessman Charles Kristof fon Stritsky. Since that time, the factory was named Stritsky's brewery. The official name of brewery was „Bier - und Porterbrauerei und Malzfabrik C.Stritzky", because the factory produced not only beer, but also porter and other malt drinks.

The new owner ordered to build more buildings on the factory's territory, actively expanding manufacture the way that, at the end of the century, the factory was at the second place by volume production in the industry. In 1913 Stritsky's brewery was still bigger and more profitable than others, falling behind only the Ilgutsiemsa brewery.

On the factory's territory, there was a two stories apartment house constructed in the end of XIX century, which was greatly increased by the reconstruction process into the industrial brewery sector in 1871. The simple facade of a building has been decorated by an eclectic decor style. A small, one story wooden house with the laundry and apartments for the guard has been constructed also.

In 1889 Karl Kristof fon Stritsky has ordered a luxurious project of a stoned apartment house to architect, named Felsko. In 1891, the new apartment house and the administration building have been connected with a stone fence and gates, which were beautifully decorated with the image of Mercury, the traders' protector. Right between Stritsky's house and other factory's buildings, an elegant garden with the fountain in the middle, was formed. 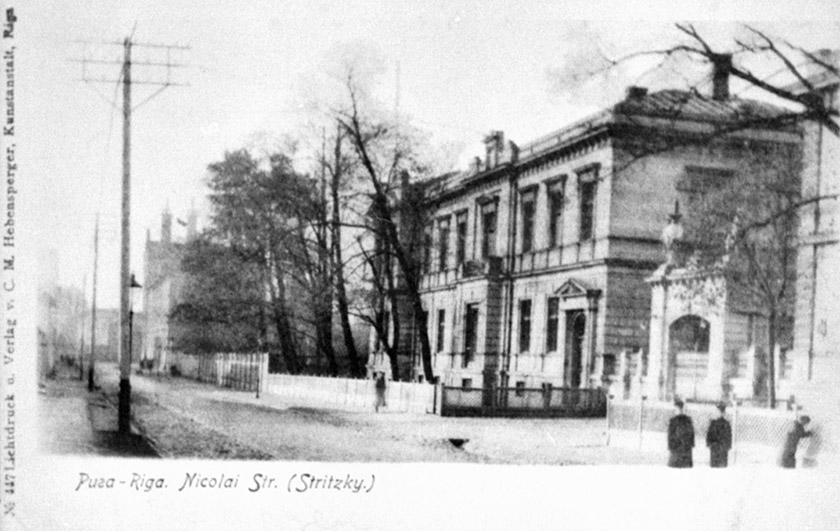 An engraving, dated 1895, represents not only the factory territory, but also Nikolaev streetand Sarkandaugavas's region, which at that point was little developed. Rather schematically, but the fountain and plantings are precisely reflected. (The photo's original is stored in the national historyMuseumof Latvia)

Building development also continued in the beginning of the XX century. In 1900, a wooden canopy has been added to the biggest industrial building. Two years later, porch has been added to the Stritsky's residence. Before the World War I, the fence along Sharlotes streethas been constructed. Some small reconstructions also took place at that time. The last planned project, the beer tank-sediment bowl, designed by architect K.Felsko, has been built in one of the factory's building in 1915.

Factory development mostly was stimulated due to favorable economic situation on a boundary of the XIX and the XX centuries when beer was exported from Baltic provinces to all the largest cities and provinces of the Russian empire, even so far, as Crimea. That's why an extensive commodity market in the end of the XIX century was the main motivation for growth of the big industrial companies. At this time the Stritsky's brewery was widely advertised in directories and other informative editions of Riga.

The advertising placed in «Rigasches Verkehrs und Adressbuch fur 1896./97» testifies that Stritsky's factory's production has received a gold medal that year at an exhibition in Nizhniy Novgorod. In 1898/99, the advertising in «Rigasches Adressbuch» is black-and-white, but the following year the factory advertising company has started to use colors, allocating texts in red color.

The popular company's advertising was a painting of the factory's complex, probably completed before year of 1891 because there are no gates, located between Stritsky's house and an administration building, and decorated with the sculpture of the Mercury.

Participation in various exhibitions was an obligatory advertising for brewery. At exhibitions, it was possible to try the brewery's products and take with a card which advertised the company and eulogized beer. The presented card is printed in honor of the fourth exhibition devoted to the Baltic agriculture (the card's original is stored in protection department of Riga's cultural monuments).

At an industrial exhibition in 1901, devoted to the 700th anniversary of Riga, the Stritsky's company has been advertised more effectively than ever. A separate pavilion was specially built for Stritsky's company, which entrance was decorated with a figure, representing the fantastic protector of brewers – Gambrina. Gabrina was a vassal of the Flanders's king during the Charles the Great rule, and he was the one who invented beer. Gabrina was standing up right next to the painting, with the lifted hand, holding the beer's jug, representing cheerful drunkards. Visitors of the pavilion could buy and enjoy the drinks of the Stritsky's factory.

In 1901, the factory was producing about 12 different types of beer and malt drinks, giving work to 150 people. 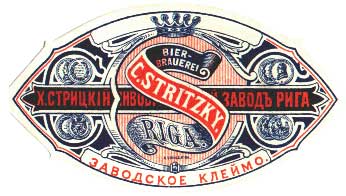 In the beginning of the XX century, accruing workers' strikes brought some damage and troubles to many companies. It was a general tendency, which was impossible to avoid, but workers of Stritsky's brewery striked for a while.

Before World War I, Stritsky' brewery was a profitable company with a wide commodity market, but during the war, the factory has suffered considerable damage – the equipment was evacuated and taken away to Russia.

In the message, written for the manufacturers' society of Rigain October, 1918 it is said that the cost of the evacuated equipment from the brewery was about 165 000 rubles. The factory equipment was taken out to Moscow, but where it remained is still not known. (The Original document is stored in Historical archive of the Latvian Republic). 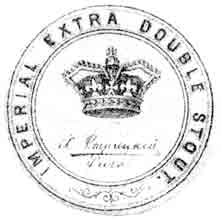 After the war, after the crash of the Russian empire, the commodity market has suffered, so the company was forced to to reduce manufacture. Instead of beer, the factory was producing wine and some other alcoholic drinks, but already in 30's the company has stopped the industrial activity. The brewery's facilities were used for the big warehouses of beer, which belonged to Ilgutsiemsa's brewery. Factory buildings have been leased to the several small companies, and in 1939 the son of the manufacturer Stritsky has sold the land of the factory to the bank „Latvijas kreditbanka". Some unverified certificates indicates that the land's cost was 300 000 lats, but the true sum of the contract, considering the style of work of „Latvijas kreditbanka", was not flaunted. The bank „ Latvijas kreditbanka" has been created to acquire so called "problem" companies for the government's property, especially those ones, which owners were not Latvian origin. The official reason why the bank took over companies was a necessity to improve their economy. However, in reality „ Latvijas kreditbanka" only gathered the powerful and profitable companies. The agreement usually occurred privately, between the owner of the given company and director of the „Latvijas kreditbanka" A.Berzinsh, and negotiations were never recorded.

Considering the fact that Stritsky's factory did not exist any more as a company, the reasons are not clear why „ Latvijas kreditbanka" was ready to pay such a great sum for acquisition the factory's territory. Though, it is necessary to notice that the Stritskys's land was fairly valuable because it occupied quite extensive, bounded with three streets territory.

Ilze Dobele,The student of History and Philosophy faculty of the Latvian UniversityYear 2006